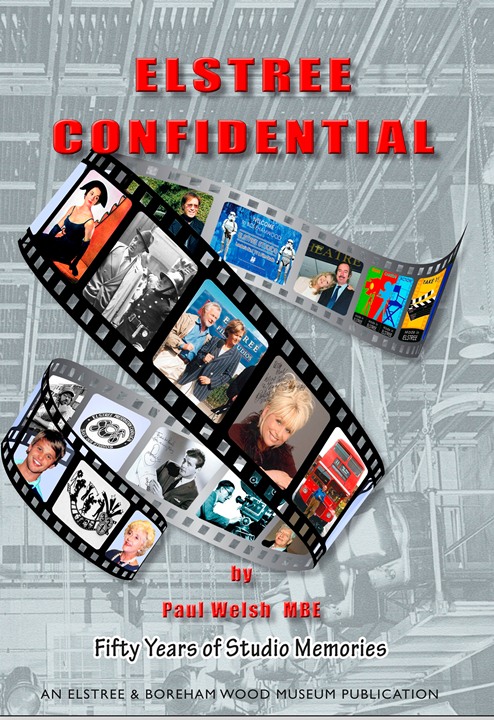 A fascinating new book has been published.  The author, Paul Welsh MBE, recounts 50 years of star encounters and film set visits at the various studios of Borehamwood.

The large hardback volume contains nearly 200 pages of anecdotes and is lavishly illustrated with almost 300 previously unpublished photos and letters from such stars as Liz Taylor, Rita Hayworth and Ronald Reagan.

The author recalls the 8 year campaign to save Elstree Studios and reveals the origins of many local road names associated with film. He takes readers behind the scenes of royal visits and encounters with a galaxy of stars, including Simon Cowell, David Niven, Sophia Loren, Robbie Williams, Cliff Richard, Barbara Windsor and Paul McCartney.

“For anyone remotely interested in the history of film, this is a must-have.”

All 400 copies of the initial printing have been purchased by readers from across the U.K. as well as the U.S.A and Europe.  But we’ve now published a soft cover edition (otherwise exactly the same) which costs  £12.99 (plus postage and packing).

All profits are shared between the author and Elstree Screen Heritage.

“As someone who started his career at Elstree Studios, I found Elstree Confidential     a wonderful insight into the Studio’s history. The photos were fantastic. Thank you Paul.”

“Paul Welsh has sometimes been called “Mr. Elstree” and his book explains why. He manages to convey his own love of the film business and those who work in it in a way which makes you want to keep turning the pages. This is a book of genuine charm and historical interest which is difficult to see anyone else writing.”

“Overall Elstree Confidential covers a lot of ground. In particular, the range of photographs makes it unexpectedly absorbing.”

“Paul Welsh’s book is a must have for all those who love films, especially those made at Elstree. It wonderfully recalls 50 years of Paul’s personal memories and meetings, and contains lots of great photos from the aptly named “British Hollywood”.

We regret that this publication is temporarily out of stock. To be notified once copies are again available for purchase, please email and we’ll add you to the list.