HomeNewsGuided Walk on the Film & Television... 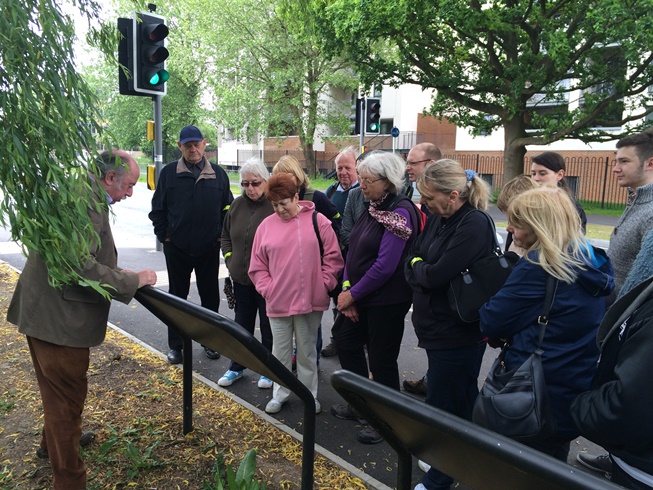 On Sunday 29th May an intrepid group of adventurers set off on a tour of the local Film &TV Heritage Trail.  Perhaps the weather wasn’t the kindest but as soon as the group assembled at Elstree & Borehamwood train station Paul Welsh soon had them marching in close formation.

Paul explained that in 1996 the British Film Institute had decided to celebrate the Centenary of Cinema in the UK by providing over 200 commemorative plaques across the UK.  Our unique film heritage was recognised when the Town Council was awarded 18 of these plaques. Most of these were unveiled in 1996; since then the Town Council has awarded another 6 plaques, and now new heritage panels are added every year.

To encourage local residents as well as visitors to take pride in our film and television heritage, within the “First Impressions” project each plaque has been moved to make it easier to read and mounted on a heritage panel with added information about the recipient.

Starting at the iconic wall mural which celebrates the contribution of men and women who brought their craft skills “behind the camera”, Paul lead the group to the large panel which marks the Allum Lane Gateway between Elstree and Borehamwood.  Striking off from there the band of brothers (and quite a few sisters too!) marched down Shenley Road to the BBC Elstree Centre, then to the site of MGM British Studios, back past Elstree Film Studios and along Shenley Road to the station.

This walk was sponsored by Hertfordshire’s “Countryside Management Group” and was part of their County-wide “Year of Walking”.

Although this tour was guided, you can easily do it yourself.  Just collect a paper guide         to the trail at the station, from the Community Museum at 96 Shenley Road or at the Town Council’s offices at Fairway Hall.   It takes about an hour to visit and read all 27 panels on the heritage trail.

For more information about the heritage trail just follow this link 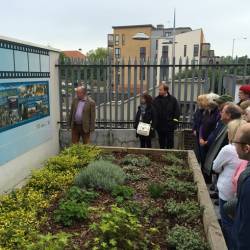 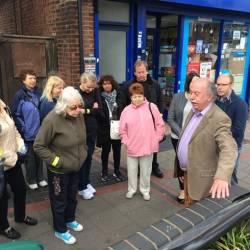 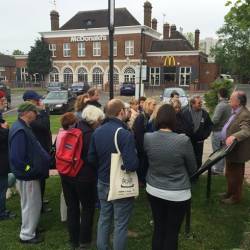 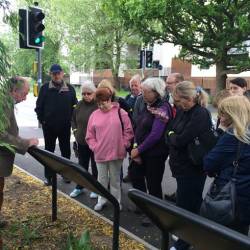 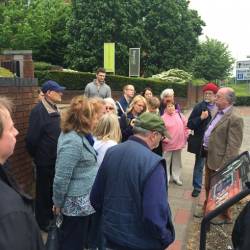 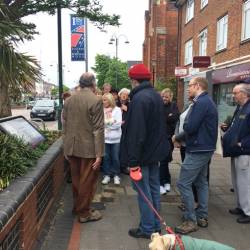 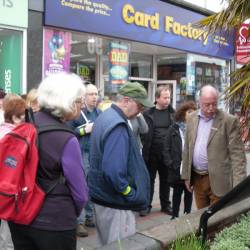 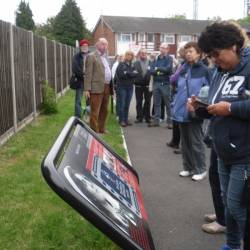