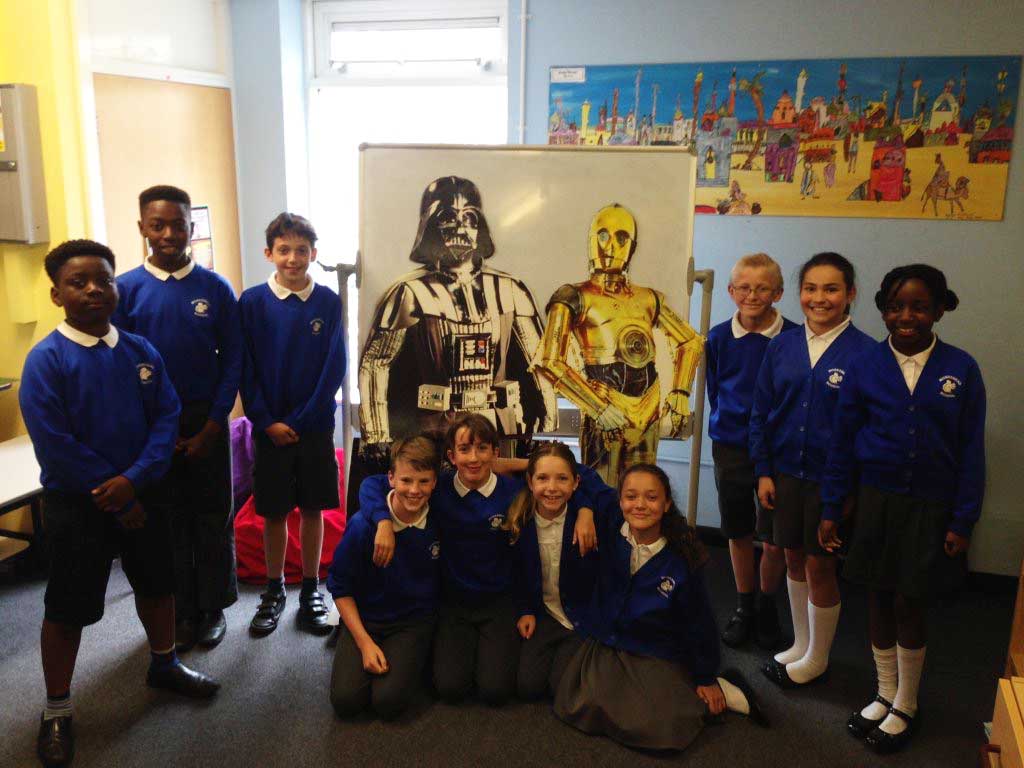 “If it weren’t for you two then I would still think Borehamwood is a boring town because I never knew it was so special!”  (Samadi) “We didn’t realise how much history our town had!” (Heidi)

Having worked with local schools in the past, Elstree Screen Heritage was delighted when teachers from local primary schools Monksmead and Summerswood contacted us this Spring with regard to programmes they were planning for their pupils.

After he attended a screening of our centenary film From Borehamwood To Hollywood teacher Tom Remnant invited us to meet his class of Year 5 (9 to 10 years old) pupils at Monksmead. Born, bred and now working in Borehamwood, Tom asked us to stress the unique local heritage.

Around the same time, local teacher Danielle Boudry contacted us from Summerswood to say that “We will be doing a topic based around the film history of Borehamwood, and I was wondering if you knew of any workshops, speakers, tours or workshops that would be accessible for a Year 3 class (7-8 year olds) to help bring this topic to life and make it more exciting!”

Indeed we did, and after meeting with Tom and Danielle we helped devise separate programmes of activities for them, including a visit to the train station and a tour of the local Film and TV Heritage Trail.  Pupils saw for themselves the stars in the pavement, the images in the booking hall and waiting room, the centenary banners and of course the iconic wall mural. They also studied the many heritage panels on their route. Within tight school schedules we were also able to visit the classrooms, to be quizzed by pupils with questions they had following their projects. We also supplied copies of our publications and some artefacts (even a canister of REAL movie film!)

As Danielle said, “They have thoroughly enjoyed the topic and with your help we have been able to really bring this topic to life and give it some real life context.”  Tom added,  “My class have really enjoyed meeting you and learning about our town”.

A bonus was to discover that several pupils in each class had fathers or grandfathers who worked in the local studios, making those pupils part of a very special “Film Family” in a very special town. Examples of the work and presentations which the children produced will be posted at